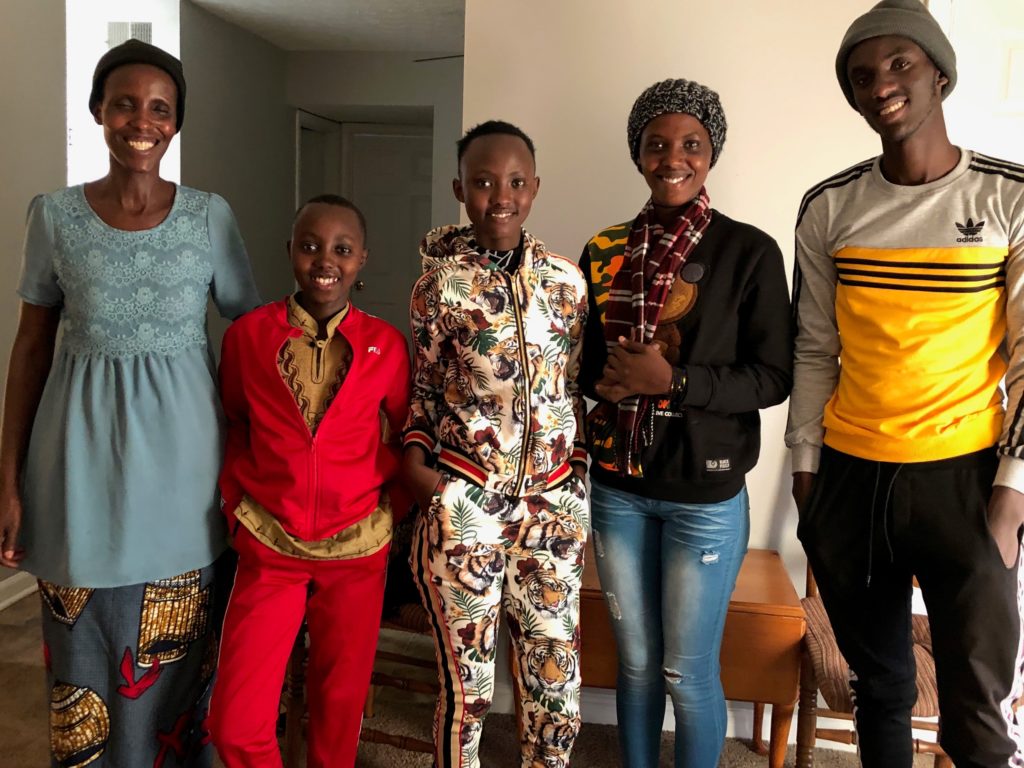 On Wednesday, November 13, 2019, our refugee family arrived at the airport around 6 pm! Members of our team were on hand to greet and welcome the family of five. There were smiles and handshakes all around. Even more comforting for them was that an uncle and friends who had lived in the refugee camp with them who are now Louisville residents had come out in full force to welcome them.  We offer gratitude for all the support and prayers and interest. Our mentoring team continues walk with them as they settle into life in Louisville.  There was a tree decorating party at their apartment, and members of the team brought them to the dinner and Advent Lessons and Carols here.  There have been on other outings during the holidays.  Both Aline and Bonke have jobs now, and the other three are in school.   Although our initial three-month commitment to welcome and mentor the family officially ends February 13, the family and members of our team have chosen to continue the friendship and mentoring well beyond that date. Blessings on them and their new life here!

Although the 3 month commitment to mentor this family ended a while back, the friendship and mentoring by some of our Cathedral parishioners continued. Below are ex-cerpts of an update sent to members of the committee by parishioner Connie Gordon on March 18: “I would like to thank David Stein for taking Aline and Bonke for their very early clinic appointment yesterday. I want to thank all of you for your efforts getting family to ESL and other places, etc. Richard (Williams) has been going since January, every week to visit the family. We had many of you scheduled to interact with the family this month. I have spoken with Barby (Knebelkamp) and we both feel we will need to suspend, in person contact. with the family for the time being, due to the threat of COVID 19. ESL classes were already cancelled as Hope Place is closed. Most of us are older and in the high risk group for the virus. I visited the family yesterday evening, at their apartment to explain that ESL was cancelled and to talk about the impact of the virus in our community and the world.While they had heard of the virus, I quickly realized they did not realize the large impact of it. I explained it was more serious to older people and that was why I would not be able to visit for a time. We talked about the closures in town and how staying together as a family would keep them safer and suggested if the kids wanted to play with other children in the building that it would be safer to do so outside. Bonke was concerned about work and I told them they should continue going until work told them different. Merci, the youngest, was very upset the library was closed as his teacher had told him he could go their after his school closed.”

Barby Knebelkamp has been the team’s official connection with Catholic Charities. Since Connie’s contact, both Aline and Bonke have been laid of from their jobs. Barby shared with us the latest news from Catholic Charities staff member Alinoti Malebo on March 24. A portion of update is here: Catholic Charities and the employment team is aware of the job loss and will do anything they can to help the clients in finding new jobs. However, it will be difficult as there aren’t enough companies still hiring to make up for all the people in the community who have lost their jobs. Also, Aline and Bonke have not been working long enough to be eligible to apply for lay-off protection. If the administration performs any other relief programs that they would qualify for, we will do our best to communicate that with them and all of our clients who might benefit. He also added the family has rent and utilities covered through May and that Catholic Charities will be dropping off some other needed items for them.

Thanks for keeping this family in your prayers.

Our refugee family came to America last fall.  Although our “official time” with the family ended a few months back, many of our team have established friendships with them that will last for years.

The mom and older son have jobs.  The older daughter worked this summer.

When school classes went virtual at the onset of the pandemic, JCPS provided one chrome book and hotspot for the three children enrolled.

Our team had a sum of money donated by a parishioner to be used for the benefit of this family.   The team decided to use this donation to purchase two additional chrome books and a hotspot for three months so that each student can do instruction and schoolwork independently.

To come from a refugee camp to America to a pandemic cannot be easy.

Thanks to all who prepared for their arrival, who welcomed them, and who continue to mentor them. Despite the current situation, the family is off to as good a start as possible.