Director of Music and Organist 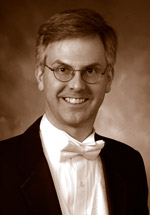 Dr. Philip Brisson is Director of Music and Organist at the Catholic Cathedral of the Assumption in downtown Louisville, the third oldest Catholic Cathedral in the country. In addition to leading the Cathedral’s worship program, he also manages the Cathedral’s Concert Series, which includes the Kelty Endowed Organ Recitals which have further recognized the Cathedral for not only musical excellence in liturgy but also for outstanding concerts in the Louisville community. Philip has led the Cathedral Choir on concert tours to England, Ireland, Germany, Austria, and Washington DC for performances in the Arlington area and at the National Shrine. Locally, the Cathedral Choirs have performed with the Louisville Orchestra, have been featured on television, and have appeared with other prominent local churches for combined Christmas and other choral festivals. Past solo performing experiences have included being “Organist in Residence” at Christ Church Cathedral in Oxford, England; appearing on the L’Organo Recital Series at the Piccolo Spoleto Festival in Charleston, SC; and concertizing in Spain, Hungary, Belgium, and Italy.

Dr. Brisson was instrumental in the founding of the Louisville Master Chorale, a premier chorale ensemble which performs the great chorale literature with orchestra in local churches throughout the Louisville area, where he was Organist and Associate Director for its first five years. Prior to his work with the LMC, he was Chorus Master for the Kentucky Opera and prepared choruses for performances which included Puccini’s Turandot and Madame Butterfly, Verdi’s La Traviata, Il Trovatore and Otello, Poulenc’s Dialogues of the Carmelites, Saint-Saëns’ Samson et Dalila, Sullivan’s Pirates of Penzance, Massenet’s Werther, Floyd’s Of Mice and Men, Humperdinck’s Hansel and Gretel, Leoncavallo’s I Pagliacci, Mascagni’s Cavalleria Rusticana, Tchaikovsky’s Iolanta, and Donizetti’s L’elisir d’Amore.

As an organ soloist, he has given recitals in all 50 states. He has appeared with the Lexington Philharmonic, the Oratorio Society of Queens, and with the Louisville Orchestra as guest soloist performing the Saint-Saëns Organ Symphony with Raymond Leppard conducting. In the summer of 2011, Philip was also a featured performer for the Region V AGO Convention in Lexington, KY and the NPM National Convention in Louisville, KY.

As a teacher, Dr. Brisson served on the faculty of Bellarmine University where he taught organ performance and a Church Music Internship at the Cathedral. Until taking over the Kentucky Opera Chorus, he oversaw the choral program at Indiana University Southeast, where he conducted the Concert Choir, the Community Chorus, and taught choral conducting. He has also presented workshops to the American Guild of Organists and to the National Association of Pastoral Musicians at both the regional and national level.

Originally from New York City, Philip received his BM in Organ Performance from the Aaron Copland School of Music at Queens College, CUNY. While at Queens, he studied organ and conducting with Paul Maynard, the former director of the New York Pro Musica. After being accepted into graduate organ performance programs at Juilliard, Indiana, and Michigan, Philip decided to attend Westminster Choir College in Princeton, New Jersey, where he earned a Masters in Sacred Music. While at Westminster, he studied organ with Robert Carwithen and choral conducting with Allen Crowell. He was also fortunate to regularly sing under Joseph Flummerfelt in the Westminster Symphonic Choir which performed Stravinsky’s Symphony of Psalms with the Los Angeles Philharmonic, conducted by Esa-Pekka Salonen and Hindemith’s Requiem with the Philadelphia Orchestra, conducted by Wolfgang Sawallisch. In 2005, Philip earned a Doctorate in Organ Performance from the Eastman School of Music in Rochester, New York, where he studied organ with David Higgs and received a choral conducting minor while studying conducting with William Weinert.

Philip Brisson is active in the American Guild of Organists, has served on the Louisville Chapter’s Executive Committee and has held both the Sub-Dean and Dean positions for the Guild. He is also the National Association of Pastoral Musicians Organist Liaison for the Louisville Archdiocese, has served as Membership Chairman of the Roman Catholic Conference of Cathedral Musicians, and is a member of The Honorable Order of Kentucky Colonels. Dr. Brisson also founded the concert artist cooperative EastWestOrganists.com, which represents several prominent young American organists in the United States. Philip, his wife, and their daughter reside in Old Louisville, the nation’s largest Victorian Historic District.