The ambo or pulpit is constructed of the same marble and granite as the altar and is of very similar design.  “That connection is purposeful in that from the ambo we hear the word of God proclaimed and that word feeds us in the same way that the body and blood of Christ feeds us.”
– Lisa Stallings, SP, Former Director of Worship

The cathedra (Latin word for chair) is an ancient symbol of the authority of the bishop in the life of the church.  The chair represents the bishop’s three main offices of teaching, sanctifying, and governing.  The chair dates from the late 1800’s.

The Archdiocesan Coat of Arms hangs directly behind the cathedra.  The Coat of Arms contains significant symbols of the diocese and the city.  Notice the mitre (hat) representing the ceremonial attire of the archbishop; the Star of David, an early symbol of the Blessed Mother; the stockade representing Fort Nelson and Louisville’s early history; the fleurs-de-lis symbolize the French missionaries and bishops who evangelized the territory; the flowing water representing the Ohio River and the Falls of the Ohio; the Indian arrowheads representing early settlers of the area. 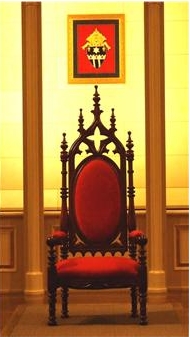